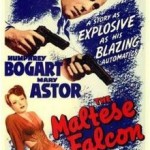 For the 75th anniversary of The Maltese Falcon, Turner Classic Movies (www.tcm.com) and Fathom Events (www.fathomevents.com) hosted a theatrical re-release of the 1941 detective thriller.

I couldn’t wait for this film-noir classic, featuring Humphrey Bogart as Sam Spade, Mary Astor as Brigid O’Shaughnessy, Sydney Greenstreet as Kasper Gutman and Peter Lorre as Joel Cairo, to come to Saratoga Springs, NY. The film’s showing at my local cinema on February 21 marked my first time seeing on the big screen “the stuff that dreams are made of.” Other notable firsts associated with The Maltese Falcon include: